The kids had planned to go to the Corvallis 4th of July parade, which is an anybody can participate event.  Just show up and be in the parade.  (One year, the CoHo musicians practiced Sousa marches for a few months ahead of time and we marched together.  It was the only band in the parade.  Trumpet, flute, accordion, guitar, fiddle, and there may have been a recorder.)

However, this year, they got confused about the time and missed it, so they decided to call a spontaneous 4th of July parade.  And the other citizens of Corvallis do not know what they missed!  Most of the Cohoots who were at CoHo were IN the parade, only a few of us were onlookers.  (They needed to have somebody to wave at.)  Here are some highlights: We started with the Star Spangled Banner, to Trumpet and flute. Sporting red, white, and blue with Lady Liberty on a float. Coho musicians in a rousing Stars and Stripes Forever. Lots of parade waves. Is that a wagon full of stuffed animals? 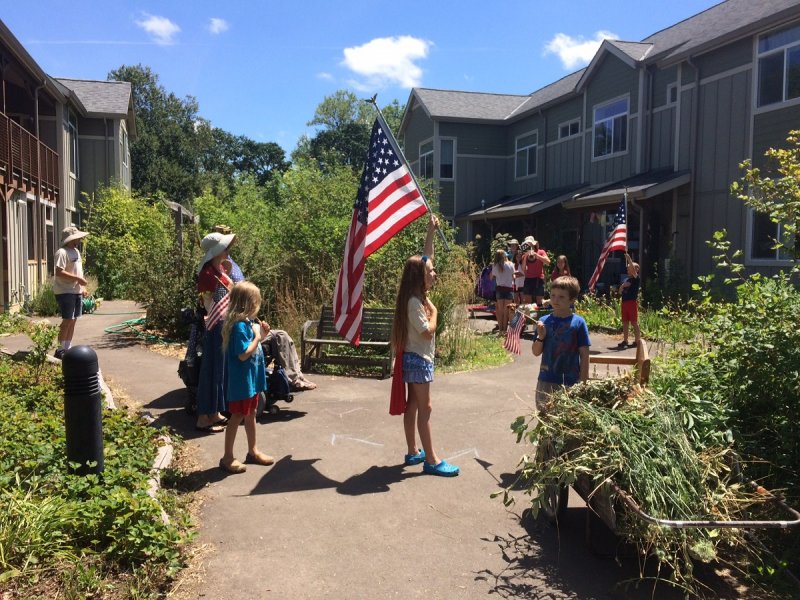 CoHo also participated in the Corvallis parade back in 2011.  Although we missed it this year, we'll be looking forward to the next one!

Posted in Celebrations, Children, The Path and tagged Fourth of July parade.